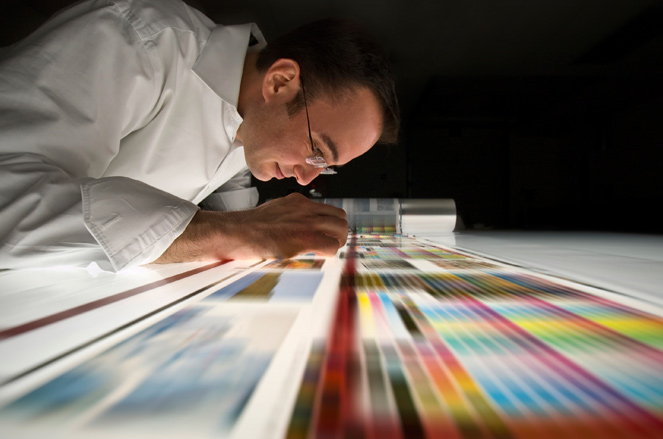 The Prepress Path to Print Quality

In Orlando, Fla., a label and film printing startup called Catapult Print is out to “disrupt the print and packaging industry” by positioning itself as “a creatively inspired printing business that redefines a new print sector model for the U.S.,” according to Mark Cook, the company’s CEO.

Ken Pavett, CEO and CTO of Flexografix, Inc., a Carol Stream, Ill., provider of high-end flexo platemaking and prepress services, says one of his company’s main responsibilities is to identify “advanced technologies that will make our customers more viable and attractive to their customers and prospects.”

At the heart of both of these ambitious business models is prepress software for automating workflows, ensuring process control, and raising flexographic reproduction quality to levels previously unattainable.

Catapult Print, says Cook, wants its software to be “the very best”: in the same class of excellence as its other key investments in presses, aniloxes, inks, and related systems and equipment. Pavett observes that if Flexografix isn’t continually on the lookout for the latest advancements in prepress software, “then I’m not ensuring the long-term viability of our customers’ businesses or my company.”

Acknowledging the crucial role of software in packaging and label production may seem like a case of stating the obvious. But, software’s profile sometimes isn’t as high as it ought be in an industry where the presses tend to get most of the limelight.

Geert De Proost, director solutions marketing for Esko, says that printers who think of their presses as assets “where the money rolls off” don’t always grasp the importance of investing in software – until they realize that they’re not getting as much productivity from their devices as they’d like to. This is why Esko offers them workflow solutions that “fundamentally automate and downsize the amount of time people spend in quality control, to get the jobs to the press faster.”

The phase of prepress known as color management is the specialty of Bruce Bayne, founder and president of SpotOn! Press, a software development company based in Portland, Ore. He says that color management – a software-based technique for making sure that monitors, proofers, platemakers, and presses have a common numerical ground for defining and reproducing color – is “almost synonymous” with process control, the discipline of calibrating the devices and keeping them within the tolerances that good color management requires.

The difficulty, according to Bayne, is that the notion of process control remains “relatively foreign to the printing community” (although he concedes that packaging and label printers, beholden to the strict color standards of their brand-owning customers, are more attentive to it than other print producers).
This is risky, he says, because without software-assisted process control, there’s no way of knowing whether the printing device has drifted – a perennial cause of color inconsistency. “Just because the road is straight,” he challenges, “can you afford to close your eyes?”

To be fair to printers, working successfully with prepress software is a different challenge from getting good results from a press. Pavett notes that when printers buy press equipment, they expect the capability they’ve acquired to last a long time – and in most cases, it will. They expect the same longevity from their investment in prepress setups, but because prepress technology is changing so rapidly, this isn’t possible to achieve without continuous research and open-ended reinvestment.

“It’s hard for those who don’t live in the realm of prepress technology every day to stay connected” with continuing advancements in prepress, according to Pavett. It’s especially difficult for print service providers that have fallen behind the curve in updating their prepress operations. Shops like these come to Flexografix for help, he says, when the prepress requirements of complex jobs outstrip what they can do in house.

The good news for shops that want their prepress to be ready for whatever comes its way is that today’s prepress software takes most of the friction out of the process. De Proost says that workflow software, in particular, has reached a point where many tasks can be easily automated across the entire prepress sequence, from file input to printing.

Esko’s offering for shops taking their first steps in this direction is Automation Engine QuickStart, which De Proost describes as an out-of-the box, preconfigured automation solution that can be fully up and running “in a couple of days.” It’s expandable, and it has a built-in feature for MIS integration that lets printers use it with the management information systems they have in place. A version for labels comes preloaded with workflows for label production; there’s a similar product for signage.

The base technology, Automation Engine, has been widely adopted by packaging producers like Catapult Print, which runs it in tandem with Esko WebCenter for web-based project management. The company also uses Esko’s DeskPack packaging prepress plug-ins with its creative software. “We have set up Catapult to operate at the very pinnacle of quality and service, so they were a natural choice,” says Cook of the Esko tools.

Flexografix first began using workflow automation technology from Esko in 2004. Pavett recalls that after tracking the first 200 jobs streamlined with the help of Automation Engine, he was pleased to discover an average savings of 38% in file processing time. “We have never looked back with regret since,” he says.

Pavett sees equal progress in software for image enhancement techniques like precise color conversions, efficient ink reductions, and flexible separations. One such tool, GMG ColorPlugin, simplifies files by eliminating selected colors from them without compromising the final printed appearance. This software, Pavett says, lets Flexografix “take the cyan out of chocolate” with a minimal shift in ∆E (measurable color difference).

What’s more, the adjustment is fast, carried out with just a few clicks of the mouse. “Your mouth might open in amazement” at how rapidly files can be optimized now compared with manual adjustments in Photoshop, Pavett says.

Prepress software, notes De Proost, also “has to be drop-dead simple” for time-pressed packaging and label printers to use. But, simplicity and user-friendliness are the very attributes Bayne said he didn’t find in the software that was available when he began working with the grayscale-based G7 methodology for achieving consistent color from proof to press.

Lacking, he said, were software tools that could track and measure press conditions and “tell a story” that would make it easier to maintain color consistency. This inspired him to develop SpotOn! Analyze, a device-mapping tool with a graphically rich visual interface; SpotOn! Verify, featuring a Visual Match Scorecard for customized process control; and SpotOn! Flexo, which optimizes matches to spot or process colors in flexo environments.

SpotOn! Flexo received a Technical Innovation Award from the Flexographic Technical Association (FTA) in 2014. This year, the FTA bestowed the same honor on Hamillroad Software’s Bellissima DMS flexographic screening solution: an advancement so noteworthy that it moves Pavett to declare, “I’ve never seen anything like it before – I’ve never seen anything as impactful in my entire career.”

The breakthrough hailed by Pavett and the FTA is the software’s Digitally Modulated Screening technology, which structures and arranges imaging dots on flexo plates in ways that other screening methods aren’t capable of. The results, according to Pavett, are “beautiful, smooth color builds and ‘fades-to-zero’ that make flexographic printing look like a continuous-tone photograph.” He says Bellissima DMS also minimizes barring and “bounce,” printing defects that can occur with older flexo equipment.

The pair of eight-color Nilpeter narrow-web flexo presses at Catapult Print are brand new, and Cook notes that everything produced on them is screened with Bellissima DMS. “We believe it is the next step in quality in flexo,” he says, for its ability to take screen resolutions as high as 350 to 450 lpi – far beyond what’s achievable with conventional flexo screening, even at the high end of its range.

The ultra-high resolution of Bellissima DMS “enables flexo to deliver lithographic and digital print quality,” Cook asserts, adding that the software has the potential to cut repro time by reducing the retouching that’s often involved in conventional flexo prepress.

Sung or unsung, prepress software for packaging and label production has improved to a point where it may seem to be running out of problems to solve. But, that doesn’t mean that prepress software vendors won’t keep trying to make it better.

De Proost, for example, says that Esko’s “very privileged insight” as a supplier to the entire packaging value chain will enable the company to craft more solutions for shrinking time-to-market cycles and helping brand owners to expand their product lines.

As automated and multi-capable as it is, however, software can’t do all the work of prepress by itself. Insisting that “you can’t have color management without process control,” Bayne recommends oversampling color data at high resolution to determine whether there are issues with the printing device. It then becomes possible to establish realistic aim points for the device and to define a sampling schedule that will capture sufficient information to manage it.